Well, it looks like I haven't posted in awhile.  School is almost done for the year which I'm so glad about.  My grades are still pretty much the same.  I got A+'s on two of my homework assignments-spelling and vocab, and social studies.
I would have done worse on the social studies one which was on naming all the states but Ms. Merriman helped me when she had me stay after, a couple weeks ago...

She also had me stay after yesterday because...well...I, uh...didn't do so well on my...math and science tests... (I got a C+ and C-, respectively).  Originally my plan was to just sneak out of the classroom because I really hate having to talk to my teachers; I see a paper with a "Please see me" on it and I try to ignore it because I'm too scared to go up to my teachers.  Especially if it's because I didn't do too well. 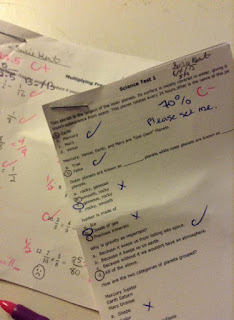 But...Ms. Merriman stopped beside my desk and told me to stay after for a bit.  So as much as I wanted to just sneak out of the classroom as quickly as I could, I probably would have gotten caught anyway.  And of course Ms. Merriman wanted to talk to me about the two tests.  With the math one, it was on multiplying fractions and having to reduce them if possible.  I hate fractions!  I'm not good at simplifying them.  It's so confusing, unless it's something easy like 25/50.  That's 1/2 since 25 is half of 50.  But something like 35/120 confuses me.  Ms. Merriman did try to explain it to me again and had me practice a couple of the problems I had gotten wrong (actually I got half points for getting the multiplication part right).  Then she gave me five more fractions to simplify last night for more practice.  I managed to get three of them right but I couldn't figure one out and another wasn't simplified enough apparently.  I did somehow manage to get up the courage to come to school a few minutes early today so that I could get help on the two questions.  And for doing the five questions, Ms. Merriman did give me extra credit points on my quiz.

Oh no!  Speaking of extra credit, I have to do a planet chart and write about a state if I want any extra credit for science and social studies-and they're due tomorrow!  And I've known about them for a couple weeks because Ms. Merriman told me about them at the meeting two weeks ago...and of course I've kept putting it off.  What am I going to do?

Did I mention I'm glad school is almost over for the year?*

*Not that Ms. Merriman is a bad teacher or anything.  She's been nice and helpful, like Mrs. Halliwell.  I just don't like school!  It's wicked boring most of the time.  And I get nervous around my teachers.

PS.  How ironic is it that I hate school but so many of my blog posts seem to be school-related?But I digress.
Posted by Susie at 8:35 PM