I have to go to bed soon but I'm really excited! So is Linda (one of grandlinda's newest dolls). Tomorrow we're going to the Manchester Monarchs hockey game; it's part of a Girl Scout Cookie Rally (strange they're doing it after everyone has sold cookies, instead of before the selling begins). Missy and grandlinda went Dec. 2007, last time, but didn't bring any dolls because it was the first time they went. But Missy had said that if they went again than I would get to go and I do! When I heard I quickly tugged on my old hockey jersey (thanks, AG, for making it look all clean and new-it's supposed to be old and dirty-ish-yanno, clean but with stains) and Juniors vest and grabbed my hockey stick and puck. Linda doesn't have a sash yet so Susie is letting her borrow her vest. Linda and I decided to play some hockey of our own. I of course have to leave my hockey stick and puck at home, tomorrow, but that's alright. Missy said I can "Chuck a Puck" and that she'll get orange foam sometime and make a doll-sized Chuck a Puck for me as a souvineer.

I wonder if there will be any other Mia dolls there tomorrow, since lots of GS troops will be there and it is a hockey game and there's the whole Mia hockey/skating thing. Missy and grandlinda help out with a Cadette troop; grandlinda is a co-leader and Missy is an adult volunteer. In Star Valley, Mrs. Halliwell is our troop leader. 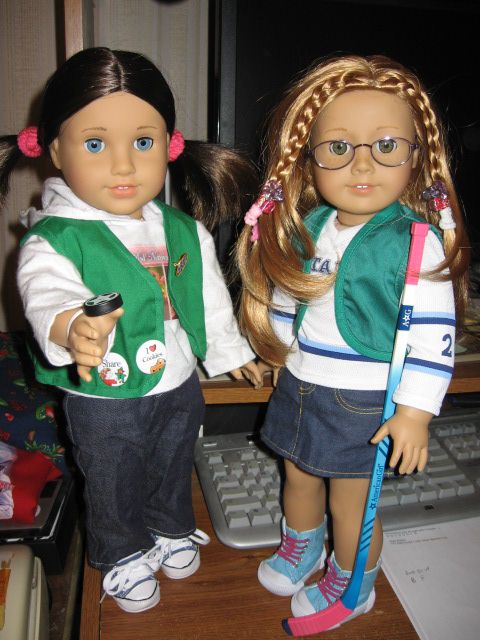 Clara wanted to play, too! She took my stick right out of my hand! 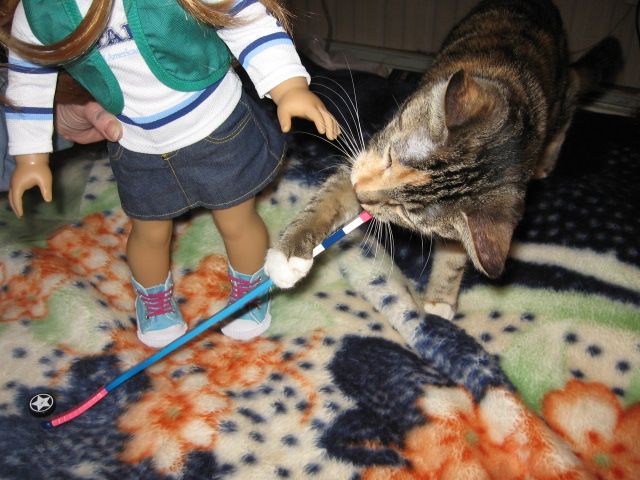 Shirley (she's my older sister; a #21-but sometime this year she's getting her "real" eyes-blue. Right now she hazel non-prescription contacts. She wasn't sure if she'd want to ditch her glasses and our parents didn't want to pay for a prescription just for Shirley to not like it, so they let her get colored ones to try-she got hazel. She doesn't like them though)-anyway, Shirley's jealous. She loves hockey, too but she already promised to babysit Nicki's baby sisters. If I have any money, maybe I can get her something. I want a patch for my vest :)
(*~Mischa~*)
Posted by Susie at 11:31 PM