Hey guys! remember how I told you I was going to AGB last Monday? It was awesome! I even had thought the night before, I could make a web show episode on location there! So that's just what Peggy and I did :) (Peggy is Grandlinda's fka Kit for those who don't know). It was so fun making the web show episodes-it's my favorite one so far! We got an exclusive interview with GOTY 2010 Lanie Holland! And we took some fun photos with the others. It's on youtube or you can watch it right here:

Here are a few photos!

This one was in a bathroom in the main mall-I love the angle of it! 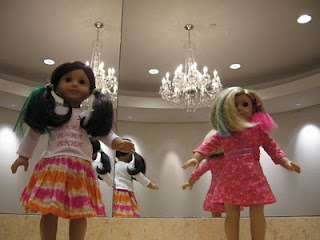 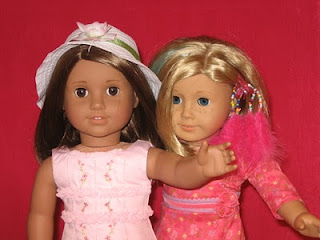 Me holding an MVP trophy for soccer-because I'm an MVP, hehe!

Missy got the Vacation outfit, which I am wearing right now because I get to model it for a review for AGPT, and the Petal Hoodie outfit. Nicki is wearing and going to model that one. Neither of the outfits are for us though...bummer. They're both for the Christmas doll this year. Blah. Maybe we'll become friends...and then we can borrow each other's clothes-then I could wear the Vacation outfit because it looks awesome pawesome on me! I look awesome pawesome in everything! Because I'm Jess, hehe! I did a get a souvenir penny though-that's cute. It has Johnny Appleseed on it.

-Jessica McConnell
Posted by Susie at 9:09 AM