I haven't written in awhile, I know. I just wasn't really in the mood to write much. Since it looks like Kaya probably won't be coming back, Nicki will probably live with me (in Star Valley, I mean; outside of Star Valley all us dolls live together...it prolly sounds a bit confusing). She's be staying here already, which has been nice. I've been trying to get used to Skyler, Nicki's dog, living here but I'm just not used to living with dogs. I don't really like dog licks on my face or hands-especially if I'm about to eat. I much prefer petite kitty licks. Nicki's trying to teach Skyler not to jump on my bed. He's allowed on Nicki's bed though. I do like my kitties on my bed but I've grown up with kitties :). Nicki says she doesn't mind though. Skyler's cute and he's actually nice around my cats. Pounce did hiss at him a couple times though, tsk tsk.

Although Nicki and I are in the same class, we usually do homework at different times. Nicki is learning how to ride Eastern style. And I take ballet once a week. We're both in Girl Scouts. I...uh...have a book report that we were assigned last week that I...um...still have to finish reading and write...

Christmas/my birthday was nice; it was quiet. Unfortunately we only got a few snow flurries and there wasn't any snow on the ground so no white Christmas this year. I don't really like green Christmases because it just doesn't feel as much like Christmas, to me. Oh well. Nicki got me a cute little Beanie Baby named Grace! She's a praying bunny and oh so adorable! (Fun fact, Missy also a Grace Beanie Baby, so ours match!).

Me with my Grace bunny: 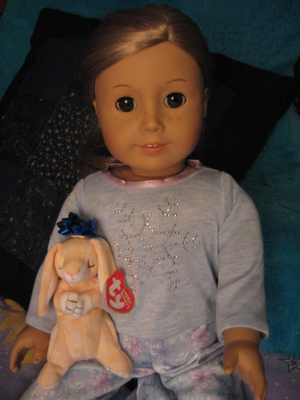 My Grace and Missy's Grace: 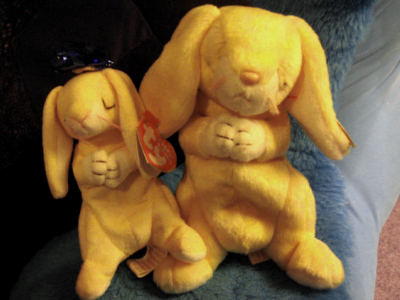 On the 26th, my family took us out to dinner, along with Marina and Hallie. It was fun.

Our Christmas tree is still up and we'll probably keep it up a few days longer. I admit, I've also still been listening to some Christmas music. I just can never stop the day after Christmas-I love Christmas music! And the tree is so peaceful and beautiful!

There's nothing much going on outside of Star Valley. Missy is probably selling Sarah to Auntie Jenny (aka in Star Valley, Sarah will probably be moving). And she's thinking about who might be coming to live here. Someone who would probably live with Addy in SV, since Kit and Maddie moved. She thinks it's between Marie Grace who would be a different girl, from New England and Cecile, who would remain herself). I think both of them would be interesting to meet. Lastly for Christmas Missy got Zoey, the AA Bitty Twin girl; Zoey is so adorable and silly. She's debating between Sandrine and Paige for the middle name.

Zoey (and Dead Tired Frankie, Jingle the Husky Pup and a little bear that Zoey claimed): 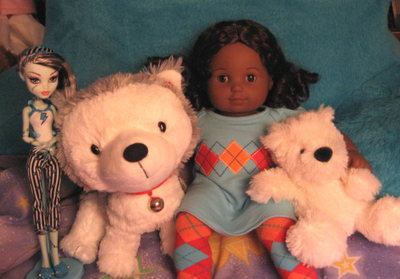 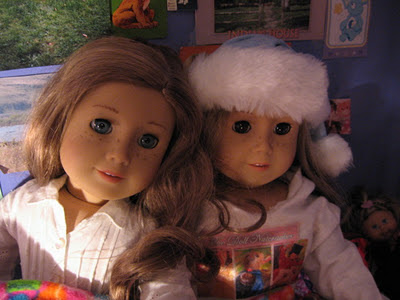